Every fibromyalgia sufferer will have a different experience so in coming to terms with my new diagnosis I thought I’d share with you how my fibromyalgia affects me.
For a very long time now I’ve had unrefereshing sleep which is incredibly frustrating. I’ve struggled with mental illness and have had bouts of insomnia but this unrefereshing sleep is nothing like that. I can remember going for days on end without sleeping but once I did, it would feel amazing. Now, unfortunately, I sleep, I may on the face of it, even sleep well as I go to sleep fine and I stay asleep. But when I wake, I’m still exhausted and feel as though I’ve not slept at all. I’ve learnt that I have to get an average of 8 hours sleep every night. I still struggle with the fatigue but it’s slightly more bearable. I keep a track of my sleep so if I’m feeling particularly zombified I do a few calculations of my averages and usually, sure enough, I’m down at 7 or 7.5 hours (or worse) and it makes such a difference. Most people find if they get a few good night’s sleep, they’ll catch up, but I genuinely need the additional hours made up.
My most prominent symptom is fatigue and this really gets to me because I’ve always been an active person but feeling lethargic all the time it’s really hard to make the right decisions about how much to do and when. My mental health history tells me following one’s desire to not do anything is rarely particularly helpful. But this is not like mental illness, I’ve previously not been able to trust my thoughts to want the best for me (anorexia tells you not to eat even when faint from lack of nutrition, depression tells you to spend time on your own even when in the depths of loneliness). Now when I want to rest, I’m trying to trust that this is likely to be the right thing to do but I’m still learning what pacing is all about. The problem I’m finding is that rest is not as restorative as it used to be so missing out on something to feel refreshed enough to do the next activity doesn’t really work. So frustrating!

Most people find a holiday, a rest or just a change, refreshing to some degree. Not me. Don’t get me wrong, it’s great to go on holiday but it doesn’t have the profound impact it used to. I have to factor in recovery time more so than most.
Feeling like I’m walking through treacle is a good way to describe the fatigue. I’ve enjoyed running since my early teens so it’s been really tough to contend with this aspect. Recently I’ve tried getting back into running but it’s been such hard work, my brain wants my legs to work but fatigue, pain and stiffness makes it…I don’t want to say impossible but it certainly feels impossible. I’m so so determined to find the right training programme so I can run and enjoy it again. I’ll keep you posted!

I’ve always been someone who’ll throw myself into something and pay the consequences later (i.e. “Just do it” no matter how tired or exhausted I feel afterwards). I’ve heard this is probably not the best way to be with fibro but that’s my personality so maybe it’s going to take me a while to learn how my personality type will interact with my fibro.
I don’t experience the extreme pain a lot of fibro sufferers do. For most, this is the predominant symptom but for me it’s in the background. The form it tends to take for me is that my muscles get quickly fatigued doing something very simple. For example, I’m writing this cramped into a plane seat and my shoulders are aching because of the angle, even though I’ve only been writing for a few minutes. Something as simple as holding my husbands hand in a particular (relatively normal) position for a few minutes can quickly be uncomfortable which soon descends to feeling painful. If I’m in the same position for more than about 10-15 minutes my joints start to ache which turns to pain within a short time. My hips in particular, sitting, standing makes no difference. At times, this presents itself as just not being able to get comfy which is really hard when trying to rest. It’s at these times I say the classic “I hurt all over” that you’ll hear from many fibro sufferers.

There are trigger points on the body that react adversely to light touch. For me, these are my shoulders, neck, back, hips and elbows (to name the worst). These points used to be used for diagnosis but they’re not believed to give an accurate picture anymore since the disorder is made up of so many more symptoms.

Some people talk about fibro-fog, an experience of having cotton wool for brains and just not being able to think straight or concentrate on anything. I occasionally experience this but it’s mostly linked to my tiredness, ie the more fatigued I am, the harder I find it to think straight (similar to the average Joe but the fatigue being constant rather than coming and going!) so I’m not sure I’d count it as a separate symptom for me.
I often hit a wall. I’ll suddenly get overwhelmingly tired such that I simply cannot stay awake. I know lots of people experience this but it happens about once a week for me and not at a predictable time on a Friday night, it can happen anytime and as yet I’ve not worked out how to predict it. I hope, as I get used to tracking my illness, I will manage this better.

I’ve always been a headachy person, this hasn’t changed. Headaches are a common feature of fibromyalgia but I wouldn’t know the difference. I go through periods of getting a lot more migraines and I’m trying to track these to find triggers I can then avoid but I’ve not come to any clear conclusions yet.
Gastro symptoms are also common in fibromyalgia. I have been having serious problems with daily nausea and indigestion which are being investigated (not looking forward to an endoscopy) so we’ll see if these are related to the fibro or a separate condition.

Unfortunately, my experience with diagnosis has been very unhelpful and this is common amongst sufferers. My GP was vague, referred me to a rheumatologist who was vaguer and didn’t offer anymore help than an internet page. Fortunately I’ve had good support from a new GP and she’s referring me to a specialist in London. It’s a shame that such a common disorder (2.9-4.7% of the population) doesn’t receive a more helpful response from doctors.
Something I’m having to battle with is the possible causes/triggers for me developing fibromyalgia. There is much debate around this, so my musings are pure speculation, this in itself is hard as there is no hard and fast conclusion to come to. Firstly, it could be due to how badly I treated my body during my anorexia, this is hard to come to terms with as although I do not believe having anorexia was my fault, I know I made some decisions that perpetuate illness rather than recovery (for example rejecting help when it was offered though fear of losing part of myself). Another possibility is that the stress in my previous job. I ended up covering a manager role (as well as my own position) when they didn’t recruit into it for over 18 months. I found it completly exhausting but because of my character (which was taken advantage of), I could see the work needed doing so I did it, putting everyone else first. I find myself feeling angry about this. Partly at the company, partly at myself for putting up with it for so long – due to my low self esteem/confidence thinking I had to put up with it and because it’s my character not to let people down. It’s recognised that emotional and physical stress are usually contributing factors for someone developing fibromyalgia.
I’d be really interested to hear about other experiences of fibromyalgia in the comments below. I’d love to hear how people are managing it (or not), it’s important we give each other support. I’ve got a new colleague at work who’s made some assumptions about me, mainly based on how old she estimates I am (that is a lot younger than I actually am…). Aside from me feeling […] 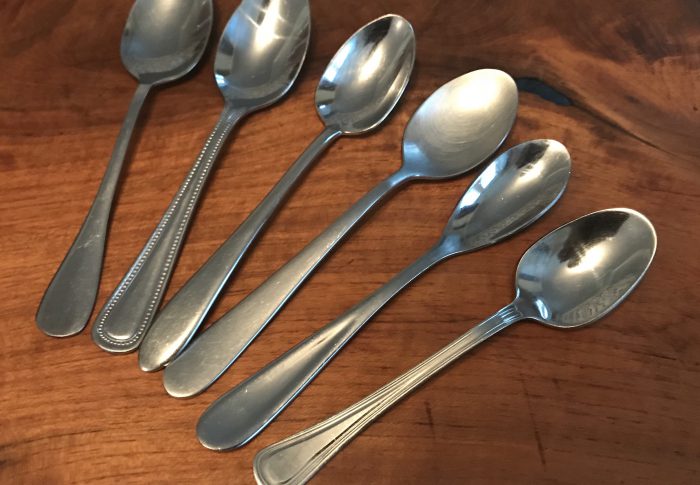 The spoon theory is a way of explaining that people With chronic illness or disability have fewer units of energy to do daily tasks and use more energy doing them, than other people. There are […]

Teensy bit of a rant alert…! If I happen to mention that I work part time, people, more often than not say “wow, you’re so lucky!” When I’m heading out of work early afternoon on […]


Sounds pretty grim to me. Don’t worry about the endoscopy I had one not long ago – painless and no after effects. Took about five minutes Look after yourself ❤️


Hello everyone, I have a question – have anyone heard of or tried a 5-htp for improving mood and sleep while diagnosed with fibromyalgia ? I’ve found this article and it seem to be interesting and helping as well -> brain-feed.com/can-5-htp-help-with-fibromyalgia-symptoms If anyone tried it please let me know! thank you Bára