A visit to The Hawk Conservancy is a fantastic day out where you get to explore the grounds, see numerous birds of prey both in their enclosures and in flying displays. It’s educational and great fun for the whole family. Plus, you’ll be contributing to some important conservation work for these birds across the world.
Vultures feeding time
In the first event of the day, we saw Deloris and Hector showing their dominance as the biggest in the enclosure, getting their choice of food from the keeper.
There are 3 distinct types:

Also, there is the bearded vulture or lammergeier who pick up the bones, fly up and drop them from a great height onto rocks so they break open and they can eat the bone marrow. 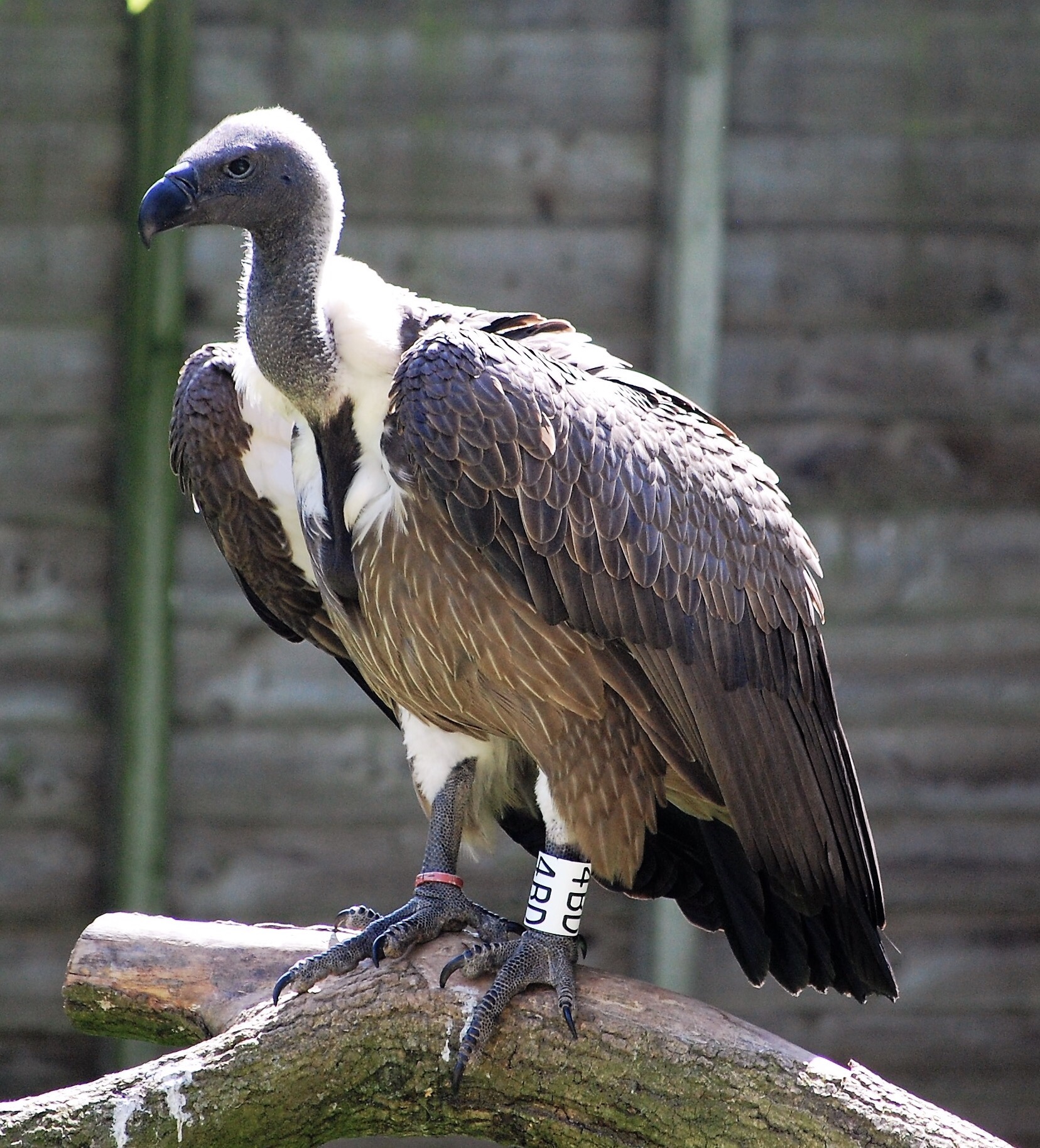 Vultures are vital for ecosystems, they are the dustbins that clear everything up; they stop rotting flesh building up and stop the spread of disease.
At the end of the 20th century use of diclofenac (anti-inflammatory) to treat sick Asian cattle caused the death of millions of vultures when the farmers put carcasses out for vultures to feed on. No one had any idea diclofenac was so lethal to vultures but with one carcass being food for up to 200 vultures, the mortality rate was astronomical. The knock-on effect was that feral dog packs filled the gap. Fear is that the same thing will happen in Europe as Italy and Spain licensed the use of diclofenac for vets. Eagles are also at risk. Support the call for a ban here.
Cassius and Clay are the Trust’s African white backed vultures, each weighing 9lbs with a wing span of 7ft. They are now critically endangered, which means the International Union for Conservation of Nature has classified them as being at very high risk of becoming extinct in the wild. The Hawk Conservancy have overseas projects running to try and restore vulture numbers in the wild.
Wings of Africa display
Here we met Othello, the fish eagle. These birds can catch anything up to the size of a flamingo in flight but usually, as the name suggests, fishes for their food.
We were also introduced to Tolkien, a milky eagle owl. Random fact, they are the only predator of the African spiny hedgehog but they can also tackle prey as large as a baboon!


Next we were in for a bit of a laugh with Dr No, their secretary bird, also known as the archer of snakes due to the way it hunts and kills its prey. It flushes the snake out of the long grass then kicks it in the head. Dr No took his role in the performance very seriously, including showing us how he would tackle a cobra by doing a flying kick! It’s an hilarious sight! Not so hilarious for the rubber snake!
We then saw some cute sacred ibis and white storks as part of a beautiful multi-bird display. Interestingly, they’re not officially birds of prey since they do not catch their prey with their feet but with their beaks. It was lovely to see the close bond birds have with the keeper as they were hand fed at the end of the display.
Valley of the Eagles display 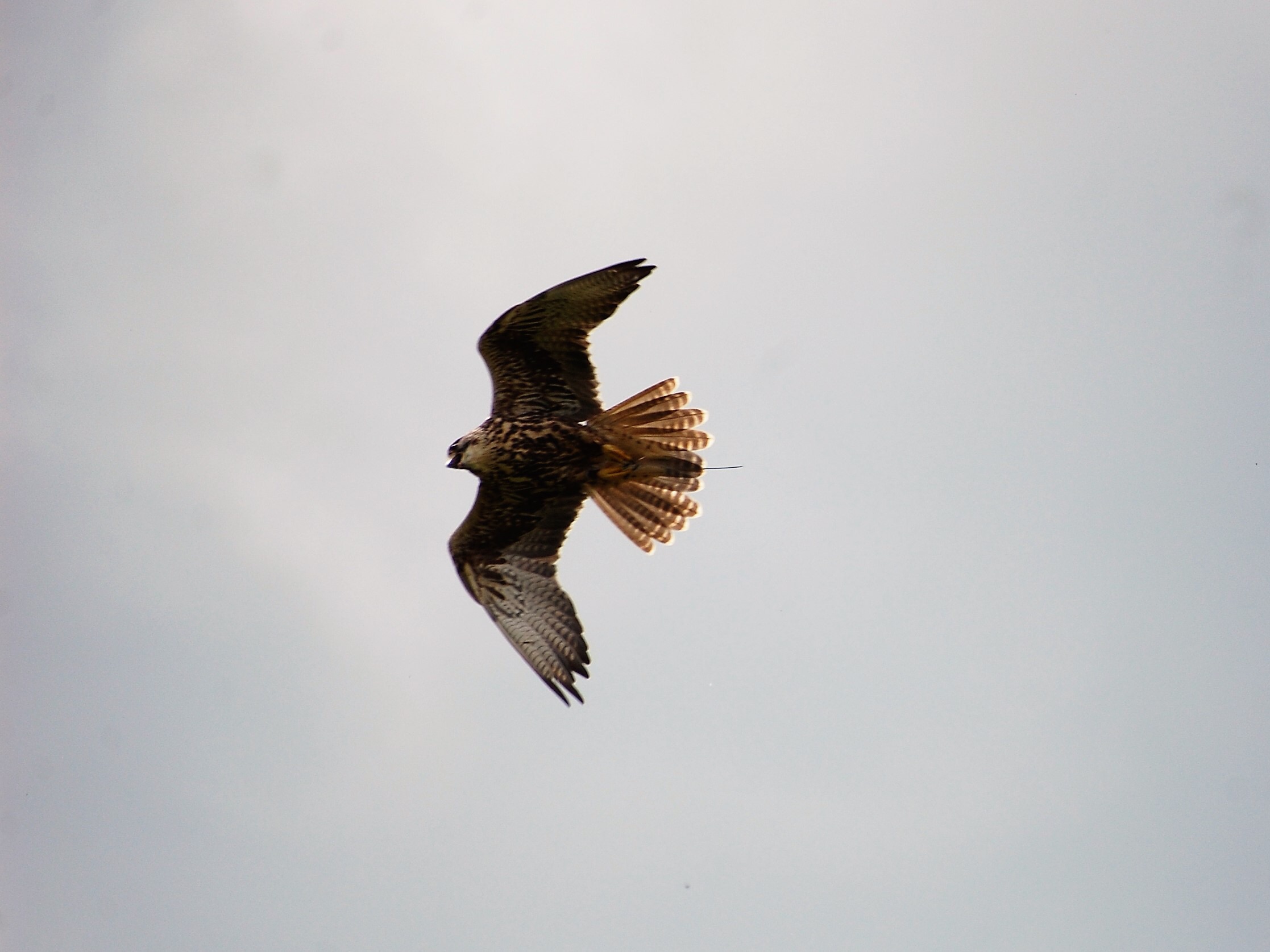 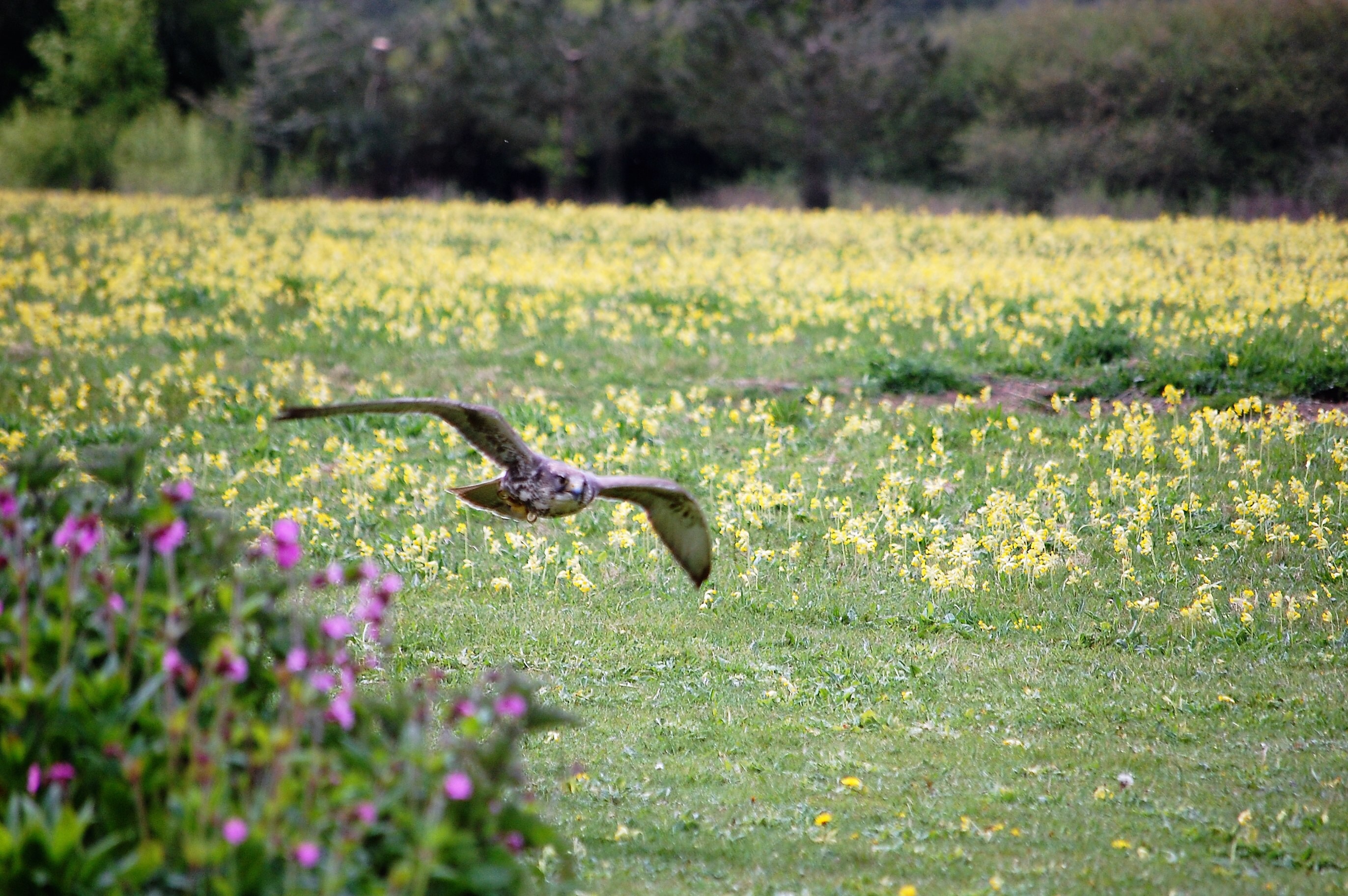 The saker falcon was an example of how many sayings we get through the history of falconry. For example being ‘under the thumb’ meaning to have control, ‘hoodwinked’ meaning tricked or ‘waiting with baited breath’ when waiting for something to happen. It was lovely to see some traditional falconry work with a lure, the relationship between the falconer and his bird was spectacular.
We were introduced to a new vulture, the turkey vulture which is one of the few birds of prey to have a sense of smell, and it uses it to hunt. Unusually it is actually a descendent of the stork family rather than the rapture family. I’m not sure who had to be more brave as the vultures swooped over and in between audience members, it was an extraordinary experience to be in such close quarters and even though we ducked, the wings of these great birds brushed our heads!
We were spoilt with 9 black kites who performed brilliantly catching their prey in their feet and eating it while still flying. This conserves energy as when birds catch prey and land to eat it, it’s the setting off again that uses energy. The commentator and the bird handler worked brilliantly together showing the birds off to their full potential in very comical fashion! 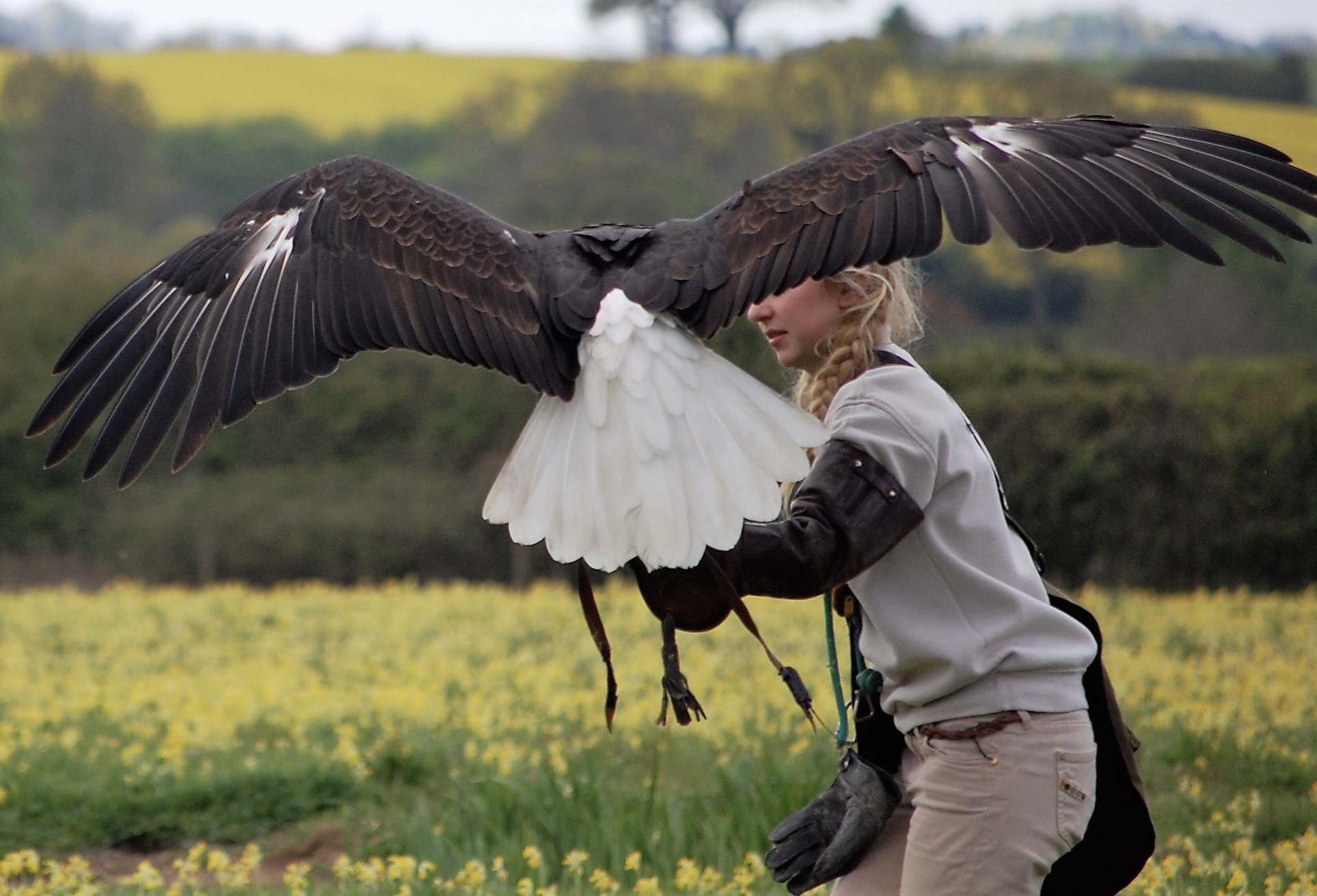 I was beginning to think we’d been misled by the title of the show but they’d left the best for last. A stunning American bald eagle was flown in from 1.5-2 miles across the rolling Hampshire countryside, he swooped into the arena within a few seconds. Absolutely beautiful!
Woodland Owls display
The first owl we saw was a tawny owl. Baby tawny owls are often brought into the Conservancy by well meaning members of the public having found them on the floor. Unfortunately, this is not necessary and leads to them being humanised. Tawny owls do something called branching where they climb out of the nest before they’re ready to fledge, unfortunately this leads to them sometimes falling to the ground but the parents will continue feeding them no matter where they are so they will be fine. Troy was one of the tawney owls brought to the Conservancy and he’d already been humanised so he’s now used to fly the flag for all his wild cousins. Unfortunately, when he arrived he was also afraid of heights (probably because his only experience of any height was falling from a tree) so to get him to do anything interesting in a display his trainer had to climb a tree to reduce his anxiety; he put on an excellent show for us!
We then saw Walter the great grey owl, not the most inventive name for such a beautiful bird. He displayed stunning agility, with a wing span of 5 feet, he flew between to members of the audience standing, I estimate, less than 2 feet apart by swooping and bending his wings up at the last second. 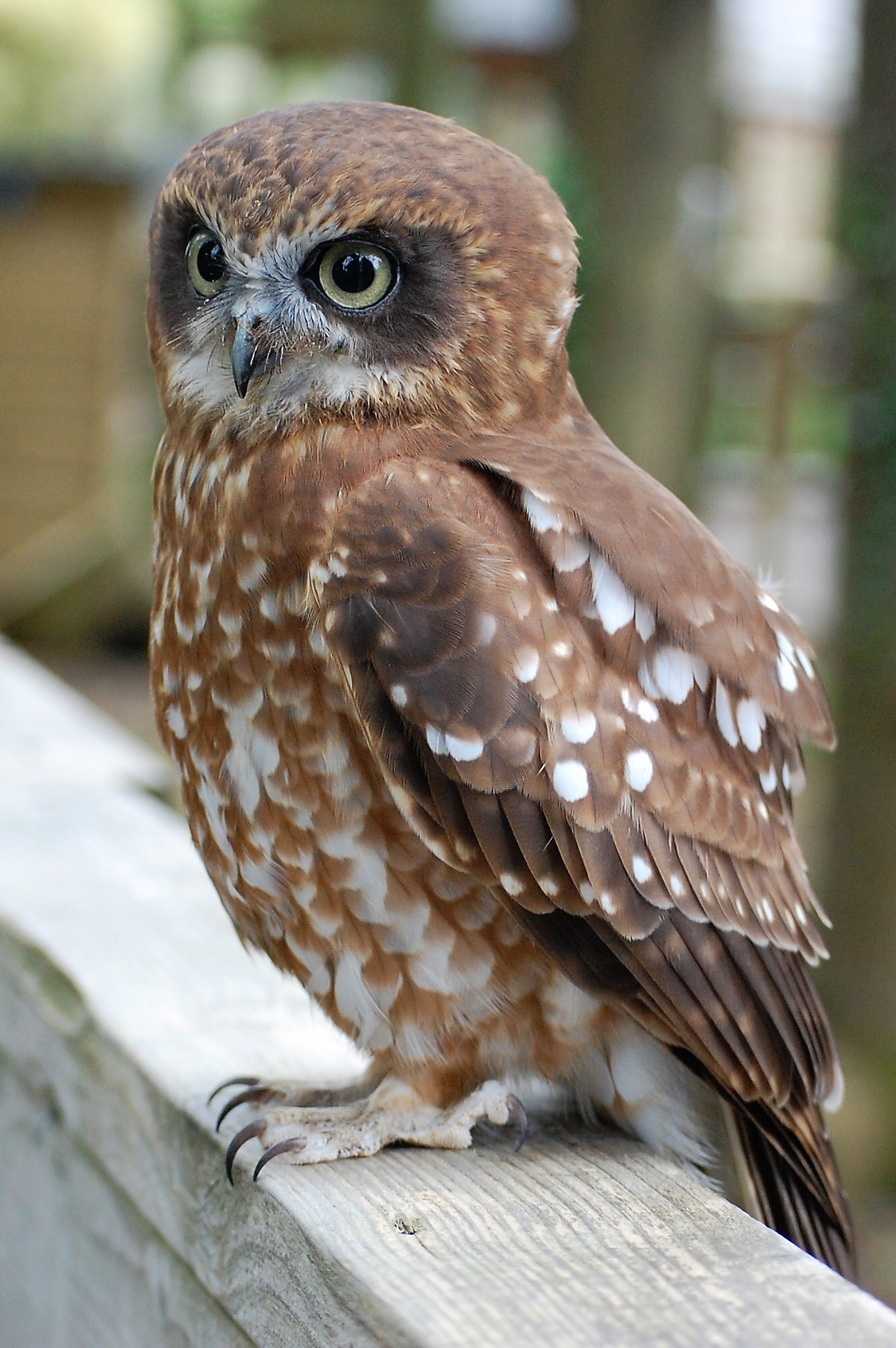 Whisper the little boobok owl was a beautiful little thing! He performed wonderfully, landing on the benches close to audience members. But he showed us that he was boss and that even though humanised and tame, he’s still able to choose what he does and wouldn’t perform his trick, flying through a hollowed out log, until the last try when he performed it spectacularly.
Our native barn owl has showed a worrying decline in numbers as agricultural habits have changed. Not only have their possible nesting sites reduced but they have seen a decline in habitat for their prey. Fortunately The Hawk Conservancy Trust discovered they like nesting in purpose built nest boxes so their nest box project is have great success! Charlie did a wonderful display for us, circling the woodland area many times. Elder, however, decided she would only show herself as the commentator was wrapping up the display, she did, however, show us her flying style beautifully.
I cannot enthuse enough about the skills of the commentators and bird handlers, they obviously love the birds and are passionate about what they do. They truely made this a wonderful day to remember.
In visiting The Hawk Conservancy Trust you can support the local, national and international work they do. I’d highly recommend a visit! 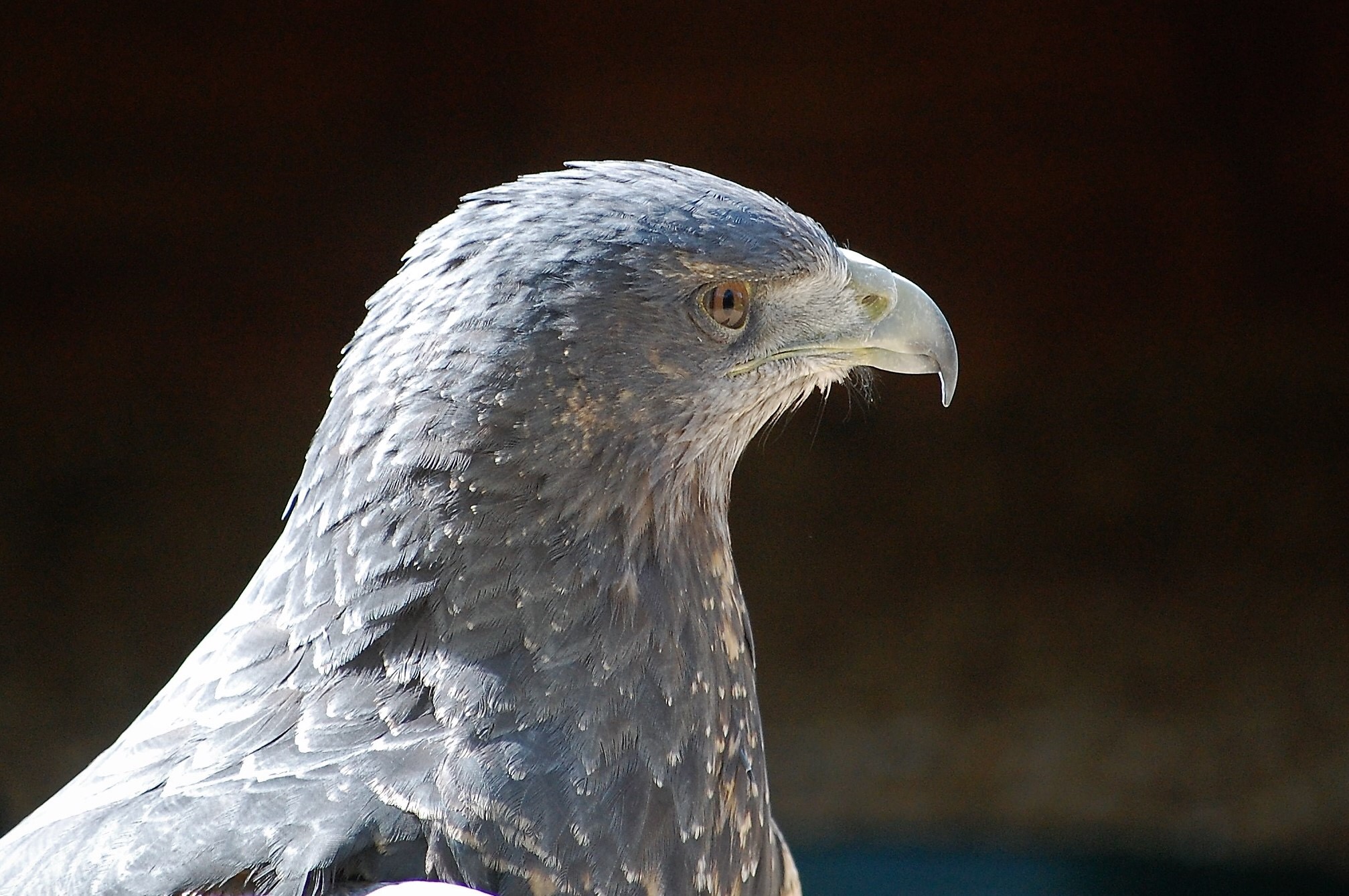